Every day we are bombarded with tons of games on each platform. Few make the mark in the store; many do not. However, very few get in the heart of the users. These are games with unique design and creative concepts. To your delight, we are reviewing one such game.

If you are a fan of rhythm-based gameplay or are one of those who get fun out of difficult and challenging gameplay, you must have played, or at least heard about, Geometry Dash Game. This iconic and infamous game has different fanbase. Let us review this game together.

Geometry dash is a game developed by a Sweden based game developer Robert Topala, RobTop is the company that he runs, in Aug 2013. It belongs to the five-game series produced by RobTop. It is available as geometry dash apk on android and .ipa for ios on their respective stores. 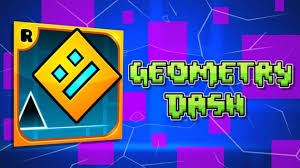 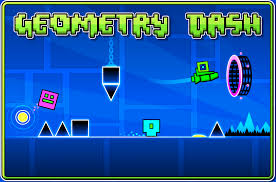 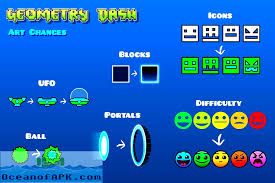 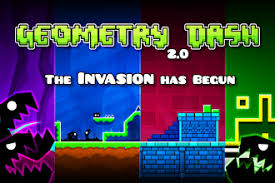 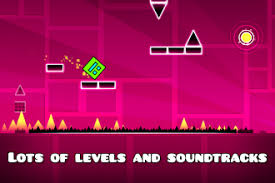 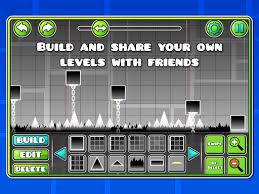 It has a rhythm-based gameplay system that looks simplistic at first glance. It suggests that users do not need a tutorial or guide to grasp the basics of it. And the game is pretty straightforward: all that happens is a block is continuously moving forward on its own, and all a player has to reach the end of the level in one shot.

However, if you expect it to be kids’ stuff to play and complete the level, you are on the wrong trail. You are going to get hit hard on the forehead once you enter the playground. Because after a regular interval, level introduces obstacles that want you to fail miserably. Sometimes, your block may resolve into a robot or a spaceship. And at other times, the pace of the game may get slower or unbelievably faster.

Apart from these, you might run into gates that invert the gravity to give you a hard but challenging situation. But still, Geometry Dash has a straightforward control system. Just tap on your mobile screen, if you are on mobile, to jump and hold to jump repetitively. Above all, you have to gather secret coins placed inside the level along with progressing through levels.

After a detailed overview of the infamous game Geometry Dash, let’s examine how this fantastic game came about. If we take the words of Robert Topala, it is clear that he did not have any detailed plan. The game lacked a detailed blueprint or concept design document. There was nothing to know except that it would be a block that could jump and crash as the game concept.

Although Robert remarked that it was inspired by the game “Impossible Game.”. Not only this, but he also was not considering mobile as a potential platform initially. However, as time passed, he altered his plan and developed Geometry dash for mobile platforms.

Initially, the Geometry dash was known as Geometry Jump. As the name suggests, it introduced a block that was sliding by itself, and all a user could do is make it jump to avoid obstacles. In the first release on Aug 13, it had only seven levels and eventually has 21 today.

Soon after its release, it earned popularity worldwide, mainly in Canada, and got on the top of the list of paid apps in the iPhone in 2014. Over the years, Geometry dash has impressed its user and bagged extremely positive reviews from critics and game media.

Now, it is time to discuss my favorite element of the Geometry Dash game: its gameplay. Even though it looks simple and pretty straightforward, it has a myriad of features and options that one can choose. As we have discussed, in brief, that it is an easy looking yet head spinner game. It may have only a 30-second long level, but get so complicated on occasions that you may get stuck for hours.

The gameplay is a little fast-paced, with obstacles placed inside the level with fantastic intellect. It is a sheer show of creativity and intelligence that makes the level super complicated on some occasions.

However, please don’t get discouraged, even with extreme complexity, it never lets you feel like it manipulates or fools you for its fun.

Because of this hardness, you will feel a sense of achievement after clearing the level. The feeling would not be less than Euphoria.

This feeling gets amplified many folds after knowing that level gets even harder as you continue.

On many occasions, you may find many secret tricks and elements of the level you are playing by the process of trial and mistake. One such thing I noticed, on one level, you go through a spaceship, some sort of, and start flying through levels. It sounds fun. However, it happens so suddenly and unexpectedly that it may make you scratch your head.

In Geometry dash, there is one more thing that multiplies the fun. There is no availability of checkpoint; that means once you crash in between the levels, you have to start over again. Please don’t get freaky about it because the stage is only 30 seconds long. But complexity and pace may get you stuck for hours.

If you ever get bored due to the look of the character, please don’t worry, Geometry dash has an extensive list of options available for customizing your character. You may have to pay for specific options. Be assured, apart from these; there are no other in-app purchases.

Above all of the features, Geometry dash allows players to create their level. They can submit their level to the servers so that other users can play it. However, to submit the level, you have to clear it yourself to ensure that it is playable and finishable. This level creation system has allowed users to choose between 60 million levels.

When it comes to graphics, I should say, it lacks fanciness and beauty that high-end 3d games generally have. However, that does not mean that it fails to please the graphic design. Geometry dash has, in most circumstances, a dark background and lively colors on top of it.

Geometry dash successfully mixes colors to please the users. On many occasions, background-color also changes depending on the type and theme of a level. This lack of fanciness and high-end graphics make it unique and available on very low-end hardware as well. It has proved that to become a successful game in the market; a unique concept is preferable to high-end graphic design.

It is that element of the game that has received fantastic feedback and praised by almost every player and critic. Every soundtrack is well synchronized with the game graphics. In a few circumstances, you will be blown away by how well it is synchronized. You might confuse these soundtracks with game sounds because of the beautiful synchronization and mixup of tracks.

In certain situations, you will get to hear specific sounds like while going through orbs or other moving through platforms, which make you jump automatically. In these situations, music is blended with the gameplay in a very detailed manner.

Most of the songs have been taken from many renowned artists like ForeverBound, DJVI, etc. Most of these songs are available on the Newgrounds portal for free use. As expected, free stuff gets abused easily by users. In the past, this has been done to Geometry Dash as well. So, Robert Topala developed the manual review system for it.

Now, we have arrived at the end of the article. We have had a detailed review of the geometry dash game so far. We have reviewed its excellent gameplay, sound system, level creation system, unique game, and graphic design, etc. Among these, my personal favorite is the gameplay and unique design concept. What is your favorite part? Comment below to let us know. Now, the time has arrived to say goodbye. Goodbye, folks, see you in the next article.

Next postTOP 5 LAPTOP UNDER 50K IN INDIA